Are A to Z indexes the best kept secret of accessible document navigation?

The solution to inaccessible documentation can be as simple and low-tech as making a better index… With proper indexing, ten per cent more effort will double the accessibility of information.

William Horton, A quick (and not too dirty) fix for online documentation, in Technical Communication.

In Australia, often cited as a leader and innovator in the field of accessibility, the Federal government requires that all annual reports of federal agencies and “non-corporate bodies” include an alphabetical index as an “aid to access”.

The indexing requirement for all federal government annual reports is set out in a directive from the Department of Finance: Public Governance, Performance and Accountability Rule 2014, 17AJ – Aids to access. 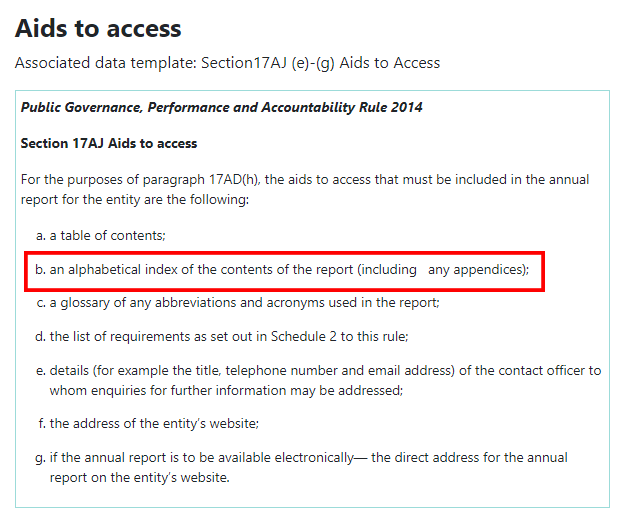 The advantages of indexes

Well-constructed, interactive indexes provide alphabetically listed links to key names and places, topics and concepts within documents. They provide useful ways to find information that other forms of navigation don’t.

For example, if key words describing topics or concepts do not appear in a document’s headings, as is often the case, they will typically not appear in its table of contents or bookmarks. In the absence of an index, the only option for finding them is search.

But search can be a crude method, returning many results (especially in large complex documents), some relevant and some not (for example passing mentions). Indexes plug the gaps that other forms of information retrieval cannot.

Many large corporates and public sector bodies around the world each year publish large and complex annual reports which are often that organisation’s most important publication of the year. It is perhaps surprising then, given the benefits of indexes, that, other than in Australia, such reports don’t tend to include indexes.

InDesign, out-of-the-box, is capable of producing basic indexes, including (with a little link editing work) links to pages, paragraphs, phrases or even individual words. For more complex indexes, professional indexing software (such as Sky, Cindrex, MACREX) may be required. Such software can be integrated into InDesign document workflows.

It is also possible to do the work retrospectively in a PDF rather than in InDesign (using software such as axesPDF QuickFix), although this is not generally the most efficient method, and is only really practical for short indexes.

Our thanks go to Sherrey Quinn, Secretary of the Australian and New Zealand Society of Indexers (www.anzsi.org), for her invaluable help with information on the relevant Australian legislation.