Standards are a powerful tool for creating accessible documents, but only up to the point that they get in the way of accessibility. From that point onwards they should take second place. A case in point is InDesign’s alt text functionality for links which was disabled last year for the sake of standards compliance, much to the detriment of both document producers and end users.

InDesign 2020 introduced an Accessibility button in the Edit Hyperlink dialogue box. Clicking this button opened an Alt Text field that (after a few initial teething problems) allowed document producers to overwrite link text with a text alternative for the benefit of screen readers. 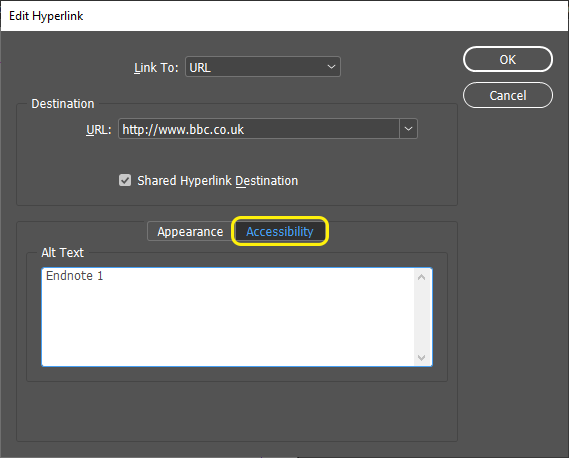 This feature could be put to many creative uses. For example, overwriting a superscript “1” endnote reference with alt text of “Endnote 1” can make all the difference to a screen reader user’s ability to properly understand such a reference.

However, unfortunately, in May last year the InDesign team removed the facility to add alt text to a link in InDesign after a complaint on Adobe’s InDesign Uservoice forum. The complainant claimed that adding alt text to links did not comply with standards, and that it was somehow discriminatory as such alt text only benefits screen reader users. But the latter claim is just nonsense. There is no way that the above example would unfairly privilege screen reader users over others because such fixes are relevant only if you can’t see the page.

In removing the alt text functionality, accessibility was sacrificed on the altar of standards-purity (not for the first time in history). If you value accessibility over strict standards-compliance, this was a serious downgrade. If you now want to fix InDesign endnotes, you will have to do so using InDesign 2020, or an early version of InDesign 2021. (Note, the Accessibility button and Alt Text field are still there but no longer do anything.)

A standards-compliant solution to keep both sides happy might be for the InDesign team to give us the capability to add Actual Text to a <Span> tag containing the link text. This will do the same job that the alt text was previously doing.

In the meantime, as real-world accessibility should always take precedence over standards-compliance, until such functionality can be created in InDesign, it really would be helpful if we could have the alt text functionality back to be going on with. As JAWS and NVDA both read Alt text and Actual text interchangeably (ironically, they are not standards-compliant in this respect) there would be no backwards compatibility issues in doing so.