For the first part of this test I used a PDF that has been a key part of my training documentation for years. It has a number of problems built into it specifically for the purpose of demonstrating how to test a PDF for accessibility. I then tested a further nine documents created by different authors and organisations.

Firstly, I uploaded my test document to the Tingtun site and then ran the checker. The results panel can be seen below. 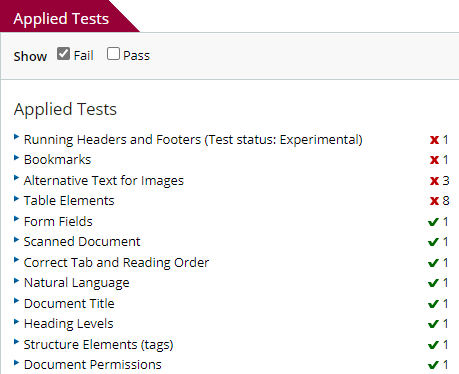 The first reported “error” was the absence of running headers and footers. Tingtun reported this as a fail against WCAG’s PDF14: Providing running headers and footers in PDF documents, despite the fact that the document has footers throughout containing page numbers. (Incidentally, another document I tested had headers throughout except on its cover page. This also failed the Tingtun test.)

Tingtun correctly reported that the document has no bookmarks. In this respect it performed better than Acrobat which overlooked this problem.

Tingtun also correctly reported that the document has three images with no alt text.

Lastly, Tingtun reported eight tables with tagging problems, although unfortunately, unlike the Acrobat checker, it doesn’t specify what kind of problems and in which tables. There are in fact nine tables in the document, five of which are tagged correctly and four which aren’t.

Tingtun correctly identified the absence of alt text and bookmarks. However, its results regarding headers and footers should be taken with a pinch of salt. Requiring headers and footers for every document would be unnecessarily restrictive to say the least. What about, for example, a single page document? Also, its results regarding tables are, I’m afraid, unreliable and unhelpful. And lastly, as we will see, it failed to identify some significant problems that the Acrobat checker does pick up. 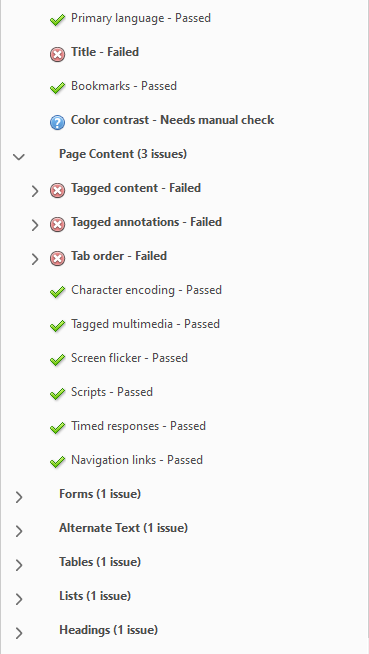 There were only two categories in which Tingtun and Acrobat told the same story:

There were two categories in which Tingtun performed better than Acrobat:

In all other respects the Acrobat checker performed better than Tingtun. Acrobat correctly reported:

“Page could not be downloaded” error

Next, I tried to upload a further nine documents to the Tingtun site. Four of them could not be uploaded at all, but instead produced the error message “string indices must be integers” (see below). This message will be unintelligible to virtually all potential users of this service, including myself.

All four of these documents, by the way, are fully accessible. They work fine with a range of assistive technologies and all pass the Acrobat checker.

None of the remaining five documents provided any further significant insights that were not already highlighted by my regular test document.

Having run a selection of documents through Tingtun, I would conclude that the Acrobat checker gives a much truer picture and is less buggy. For that reason, Acrobat is still by some margin my preferred checker, caveat, of course, the ever-present danger of over-reliance on automated PDF accessibility checkers.