The Cabinet Office has confirmed to us that the government  intends to incorporate the recently agreed EU Accessibility Directive into UK law, despite the Brexit process.

Last October we posted a report about the directive, explaining how the directive aims to make public sector websites, documents, mobile devices and apps accessible to everyone, across Europe.

Significantly, PDFs are specifically included in the scope of the directive. However, some office file formats, such as pre-recorded time-based media and the content of archived websites are excluded. The intention is that information contained in excluded formats will have to be provided in an accessible form on request.

The Brexit vote had meant that there was a question over whether the directive would be transposed into UK law. But as can be seen from the Cabinet Office letter below (with a link to a downloadable accessible PDF version),  the government aims to implement all or most of the provisions of the directive. It states:

…we do not anticipate any change to the statutory duties imposed by the directive, save for the source of primary legislation

In short, it is the government’s intention to agree a suitable standard that will not
change from the user’s perspective simply because of our change in relationship to the
European Union. 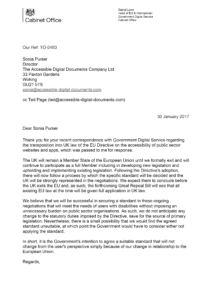